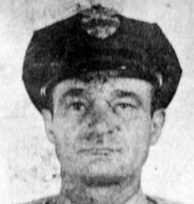 Auxiliary Officer Santini, a 10-year veteran, was on marine patrol. While assisting a sailboat that had run aground, a winch was pulled off and struck him in the head. He was knocked off the police boat into the water unconscious, and died several days later.

On July 26, 1964 Auxiliary Officer Santini, a 10-year veteran of the police department, was assigned to marine patrol on the Westport Police Department boat. He responded with another officer to assist a sailboat that had run aground off the Westport shore. As the police boat was pulling the boat off a sandbar a winch on the grounded boat was pulled off and struck Officer Santini in the head. He was knocked off the police boat into the water unconscious. Auxiliary Santini never regained consciousness and died on August 1, 1964.

Chief Samuel Luciano noted that Officer Santini had given unselfishly many hours to public service for more than ten years before his death, leaving a wife and two young daughters.