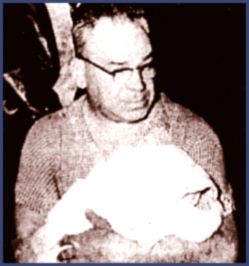 After two back-to-back hurricanes (Connie and Diane), the water began rapidly rising and engulfing the town. Officer Yodkins was using a small boat to ferry people to safety from their rooftops. Just after rescuing a baby, Officer Yodkins's boat capsized and he was lost in the raging water.

On the weekend of August 12th through 14th, 1955, Hurricane Connie deposited about 7 inches of rain on the Town of Farmington. Not to be undone, Hurricane Diane followed shortly after and deposited an additional 13.77 inches of rain on the Farmington Valley. On the morning of August 19th, the water began rapidly rising engulfing the town. All Police, Fire, and Civil Defense members were called in to begin evacuation and rescue efforts. Officer Charles Yodkins, Sr. and Volunteer Joseph Morin, Jr. began rescue work using a small boat to ferry the people from rooftops in the River Glen area. Officer Yodkins had rescued a baby and had landed to safety when this last photograph was taken.

Officer Yodkins and Volunteer Morin later returned to the River Glen area to continue their rescue attempts. Tragedy struck when their small boat capsized and both were lost in the raging water.

On the 50th anniversary of his death Officer Yodkins was posthumously awarded his deparment's Medal of Valor.