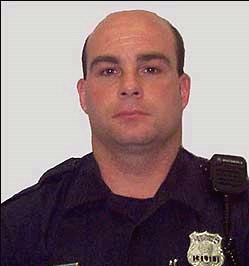 Officer Picagli, a 17-year veteran of the New Haven Police Department, was killed when he was struck by a car at a construction site where he was directing traffic in the rain.

Officer Dan Picagli, a 17-year veteran of the New Haven Police Department, was killed when he was struck by a car at a construction site. Officer Picagli was working extra duty directing traffic. The stretch of roadway had been altered due to the construction. The incident occurred in a driving rain and the motorist simply did not see the officer.

Picagli was a highly respected police officer. New Haven Mayor John DeStefano said that "Officer Picagli was more than a cop. He was someone who brought people together, who created a sense of community. He was a life enhancer to all with whom he came in contact. More than any memorial, his basic decency will keep his memory vibrant in our City.”

The 38 year old officer was survived by his wife and four children.

Police Chief Francisco Ortiz noted that "We will never forget Officer Dan Picagli. We will memorialize his contributions to the community through the police department in the years to come."

For much of his career, Picagli served as a youth officer in the city. He served as a school resource officer. He also ran the Police Athletic League, a youth program that provides athletic caps for city kids, and the Board of Young Adult Police Commissioners, a group of city youths who serve as advisors in the department. It was not uncommon for Picagli to reach into his own pocket to pay for a child to attend some camp or pick up lunch for a youth who forgot his. Officer Picagli had a way of connecting with kids, a knack for talking with youths instead of arresting them.