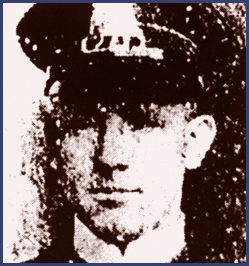 Officer O'Connell was assisting in the transport of a man arrested for domestic assault. The man had not been handcuffed and he was able to get Officer O'Connell's gun and shoot him five times.

On August 15, 1938 Officers responded to 35 Greene Street on report of a domestic there. Upon arrival the officers arrested the husband for assault and he was taken to the Chapel Street Station. A short time later a wagon was called to transport the husband to the downtown station. At that time the wagon driver picked up Officer Daniel T. O'Connell to assist him. The husband was placed in the rear along with Officer O’Connell to guard him. In the back of the wagon a fight broke out between the husband and O’Connell. The husband had not been handcuffed and he was able to get the officer's gun and shoot him five times. O’Connell died later at St Raphael’s Hospital.

The husband was captured at the scene by another officer and an off-duty fireman.

Officer O’Connell was survived by his wife, Mary.