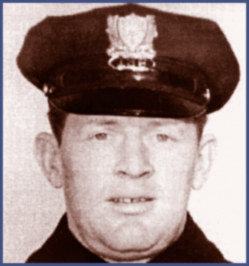 Officer Troy was called to an armed robbery at a restaurant on Main Street, and chased after the robber. Hiding on a second-floor porch, the robber opened fire. Officer Troy returned fire, emptying his revolver; he died later at the hospital.

Officer David Troy was a member of the Stamford Police Department. On Thursday, July 7, 1960, Officer Troy and his partner were called to an armed robbery at the Skipper Bar and Restaurant on Main Street. A witness pointed out where the robber ran. The officers chased after him. They ran down an alley behind Main Street, near Greyrock Place. The armed robber, hiding on a second floor porch, was found by Officer Troy. The robber was on a partially shielded metal stairwell on the second floor. Officer Troy was on the roof below him giving chase when the robber shot him down. Officer Troy returned fire, emptying his revolver. Officer Troy was shot in the chest and abdomen. After being shot, he slid off the roof to the ground and crawled under a truck for cover. Upon hearing the gunshots, his partner ran back to find him. He was taken to the hospital, where he died of his injuries.