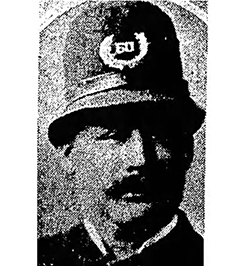 Officer Deitz was on traffic duty during an attempted robbery at the Bridgeport Savings Bank. He became involved in the pursuit of the suspect and was shot by the robber in the neck and lung; he later died at the hospital.

Officer Ellsworth G. Deitz was on traffic duty at the intersection of Main and Fairfield Streets on March 8, 1910, when a subject entered the Bridgeport Savings Bank and demanded money from the bank employees. The subject was told to come back later as it would take time to gather the amount of money he demanded. Detectives began to investigate the incident, and Officer Dietz became involved in the pursuit of the suspect in the attempted larceny at the bank, and was shot by robber in the neck and lung. He was taken to St. Vincent’s Hospital where he died.