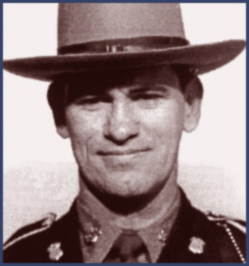 After pursuing a stolen car, Trooper Morse, age 31, approached the car and was shot by the driver. Before he died, he whispered portions of the license plate number to sailors from the Groton submarine base who found him lying near his car.

On February 13, 1953, about 9:00 PM, Ernest J. Morse, age 31 of New Haven, was on patrol on the Wilbur Cross Parkway near Wallingford when he spotted a car reported stolen in Brookline, MA. Morse pursued the car on the Merritt Parkway to Trumbull before he was able to stop the vehicle near Route 8. As he approached the car, John Donahue, age 20 of Arlington, MA fired a shot and struck Morse in the abdomen. Several minutes later, a car load of sailors from the Groton submarine base found Morse lying near his car and still conscious. Morse whispered portions of a license plate number to the sailors and directed them to use his radio to call for help. An ambulance and other State Police came to his aid, but Morse died less than an hour later at Bridgeport City Hospital.