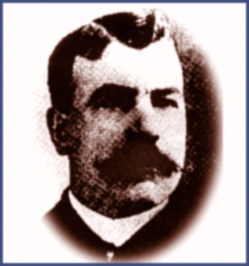 Patrolman McKeon was shot and killed while raiding a suspected house of ill repute.

Patrolman Hugh McKeon was shot and killed while on a raid at 12 Prindle Alley. Shortly after midnight Officers McKeon and Turbett decided to raid the suspected house of ill repute and that is when the shooting took place. Andrea Laudano, of 12 Prindle Alley was arrested by Officer Christopher Ledwith for the murder.