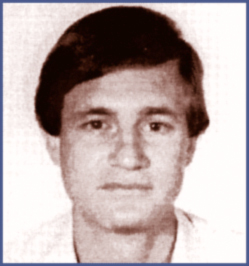 Accomplished, hard-working, and well-liked, Customs Inspector Buczel was killed in the line of duty at age 35 during an enforcement inspection for contraband in containerized cargo in New Haven.

It was a warm, humid morning in late July 1979. Jim was about to leave his hometown of Watertown, MA. He had packed his car and was ready to embark upon his new career, one that he had diligently pursued. He was to begin his work as an Inspector in the United States Customs Service. His first step was a 3,000 mile ride to Los Angeles, CA, to work at its international airport. What began so promisingly that summer morning would end all too soon when Jim was killed in the line of duty on October 9, 1988 during an enforcement inspection for contraband in containerized cargo at New Haven, CT.

In his short time as a Customs Inspector and his brief life, Jim managed to accomplish much and to demonstrate to all who came to know him what an outstanding person he was. Jim always approached all that he did with a strong-willed determination, with care to detail, and with sensitivity to the feelings of anyone involved with him. He had great success in his early years in school, a straight ‘A’ student, captain of his high school basketball team, and Valedictorian of his graduating class. While accomplishing this, he also managed to find time to work and be a responsible family member. He could seemingly do it all.

As a compliment to his hard-working style, Jim was gregarious, well liked by all who had contact with him. He was generous with his time, care and advice. His zest for fun matched the intensity of his work style.

After high school, Jim attended Brandeis University before going to work for the Town of Watertown as a Veterans Agent. It was while working as a Veterans Agent, that Jim developed an interest in Law Enforcement. He enrolled in Northeastern University, earning an Associates Degree in Criminal Justice. He began to examine possible career choices in law enforcement. He was quite pleased when his appointment as a Customs Inspector came through in 1979.

Despite his success in Los Angeles, Jim longed to return to his home area, New England. He had always been close to and supportive of his mother, Helen; his father having died when he was six years old. He also had close relationships with his brother, Frank and sister, Valerie. In order to be closer to his family and to continue his career in the United States Customs Service, Jim transferred to New Haven, CT, in 1982. He became comfortable there, earning the friendship and esteem of those he worked for and with.

In addition to performing his own work, Jim was ever ready to assist family and friends. He would work the extra shift to give someone time off. He would travel home frequently to perform errands and chores for his mother. He would never go to the supermarket without first checking to see if his elderly neighbors needed anything. Just two weeks before his death, Jim organized a going-away party for a fellow inspector transferring to Boston.

At the age of 35 when he died, Jim was just coming into his own. He had developed skills and confidence. He was investing and planning for the future. He had ambitions, hopes and plans. Suddenly, tragically, he was dead. Those who were closest to him felt the loss deeply and live with a void that will never be filled. Jim was a person who embodied all of the qualities that we consider good. He family and friends all love and miss him.