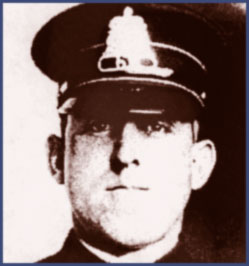 On the department for five years, Patrolman Alexander was struck by a car while operating his motorcycle.

On Saturday, October 14, 1927 Patrolman James Alexander was operating his motorcycle on Lines Street near Quinnipiac when he was struck by a car and knocked to the pavement. He was riding with Officer Henry Miller, who placed the other driver under arrest for reckless driving. He was only on the department for five years.

He was survived by a brother in New York City and one in Ireland.