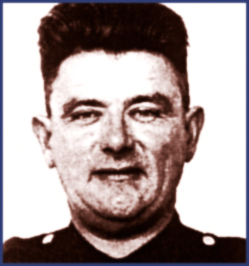 On Sunday, January 16, 1950, Greenwich Police Detective James Butler and his partner, Detective Thomas Burke, responded to an address in the back-country of town on the report of two stolen turkeys. Shortly after beginning their investigation, the suspect in the case brandished a seven-shot .22 caliber pistol. He fired four shots, one hitting Detective Burke in the side, grazing his stomach, and two penetrating Detective Butler’s stomach and intestines. As Detective Butler lay on the ground, he saw the assailant turning the gun back towards Detective Burke, preparing to fire again. Detective Butler drew his .38 pistol, getting off one shot at the assailant, which struck him in the neck and head, and killed him instantly. Detective Butler died on April 18, 1954 as a direct result of the injuries he sustained during this incident.