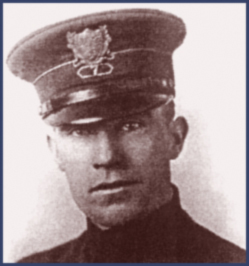 Officer McNamee, age 39, was fatally shot through the back after approaching a stolen car at a filling station.

January 16, 1930, Officer McNamee, 39, was fatally shot at 9:15 PM after approaching what was a stolen car at the Ebbs filling station, corner Stafford Avenue & Washington Street. An occupant of the vehicle shot McNamee from the back seat of the car. Officer McNamee died of a single gunshot wound through the back.

Killer John Brophy, 19, of Waterbury was arrested in that town less than 24 hours later, along with others in the vehicle. The manhunt included the help of New Britain, Waterbury, Torrington and Southington Police Departments. Two gunfights ensued before Brophy gave up.