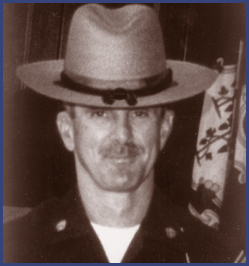 Officer Spignesi was a well-respected conservation officer, and the first officer to be slain in the line of duty in Connecticut's 131 years of conservation law enforcement. He was fatally shot while investigating an area where there had been illegal hunting complaints.

Beginning his career in the department as a seasonal employee in the wildlife division and moving onto wildlife biologist in the deer research program. In 1991, he became a Conservation Officer and grew into a dedicated, conscientious and well-respected member of the law enforcement family. Officer Spignesi was a highly motivated member of the Chemical Immobilization Team and his participation helped to make that program a success.

In August 1998, the Department of Environmental Protection awarded Jim its Medal for Meritorious Service for the safe return of a runaway youth, who was reported to be distraught and had threatened suicide in the Nachaug Forest. Jim located the youth hiding in a thicket of mountain laurel and returned him to his family without incident.

Jim had numerous letters of appreciation from the public and supervisors in his file. One such letter showed what type of an officer he was. In September of 1997 Officer Spignesi and Sgt. Rick Lewis located a vehicle parked in an area where there had been illegal deer hunting complaints in the past. Officer Spignesi returned to the area after dark and located the vehicle, which was parked in the long driveway of an elderly couple. Officer Spignesi ascertained that the two occupants had been fishing in the woods and they had decided to park in the driveway to have a snack. Mr. Welch, the elderly homeowner was quite startled having these unknown people in his driveway. Officer Spignesi took control of the situation much to the homeowner’s relief.