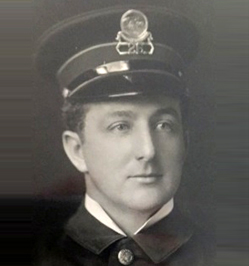 Inspector Donahue, a 17-year veteran of the Waterbury Police Department, was shot in the chest by a suspect at Police Headquarters. He spent 6 weeks in the hospital before succumbing to his injuries.

On Monday, June 21 1920, at 5:30 a.m., a man named Arthur Brouix of Biddeford, Maine entered Waterbury Police Headquarters stating he wanted to file a larceny complaint. Brouix reported that his twenty-three year old wife Georgiana Rheaume had stolen $650.00 from him and was planning on leaving the city. Since no detectives were on duty at that time, the desk officer told Brouix to return at 7:30 a.m., and speak with the detectives about his complaint.

Promptly at 7:30 a.m. Brouix returned to Police Headquarters and was interviewed by Inspector John F. Donahue, a seventeen-year veteran of the Police Department. After taking Brouix' complaint, Inspector Donahue and some other inspectors located Rheaume at the Waterbury train station where she and another man, who Brouix claimed was her new boyfriend, were attempting to board a train to leave the city. Inspector Donahue and the other inspectors returned Rheaume and the man to Police Headquarters.