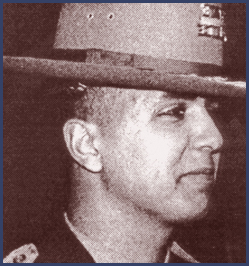 Trooper Agosto, age 27, of Litchfield, was a two-year veteran of Troop L, but was working with the Traffic Squad because of Thanksgiving holiday traffic when he was struck and killed on I-95 in Greenwich.

On November 22, 1989, Trooper Jorge Agosto, age 27, of Litchfield was struck and killed in I-95 in Greenwich. Trooper Agosto was a two-year veteran assigned to Troop L, but was working with the Traffic Squad on I-95 because of the Thanksgiving holiday traffic. Trooper Agosto had pulled his car behind another trooper’s to assist him with a motor vehicle stop and was walking on the shoulder of the road when he was struck from behind by a car that veered off the road for no apparent reason.

Trooper Agosto’s death demonstrated again the vulnerability of all Troopers on the highway.

The operator of the car had a diabetic condition, and shortly after the accident, was found to be suffering from hypoglycemia, a condition brought on by low blood sugar. The condition is known to cause dizziness, confusion, and blackouts.