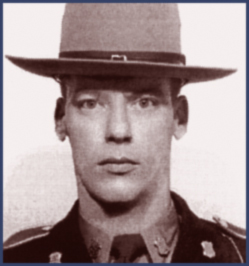 Trooper Stoba Jr., age 34 of Meriden, was shot to death during a domestic dispute. The suspect had agreed to come with the officer to sober up, but came out of his house armed with a rifle, and shot Trooper Stoba before he could react.

On August 6, 1962, Trooper Joseph M. Stoba Jr., age 34 of Meriden was shot to death during a domestic dispute. Stoba was hit once in the left side of the chest while standing on a porch. He died at the scene. Trooper Stoba was working evenings at Troop K and was assigned to transport a prison trustee back to the State jail in Haddam. As he and the prisoner drove towards the jail, Stoba was directed to a domestic at the Czaja home in Portland. Stanley J. Czaja had a history of drunken domestic incidents and was well known at troop K. Trooper Stoba and Czaja spoke on the porch of the Czaja home and both agreed Czaja should go with Stoba to sober up. Trooper Stoba let Czaja go back into his house for a sweater, but when Czaja came out, he was armed with a rifle. Before Stoba could react, Czaja shot him.