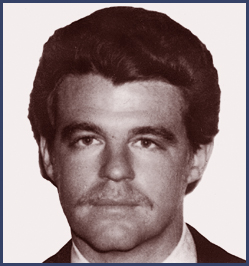 A navy veteran, superb boater, and avid fisherman, Patrolman Bateman had been with the Darien Police Department for seven years when he was shot to death while answering a burglar alarm.

Patrolman Kenneth Bateman, Jr. was born in Stamford, Connecticut on May 16, 1947. After graduating local schools, Bateman served in the U.S. Navy on the U.S.S. Enterprise, being honorably discharged as a Yeoman 3rd in 1970. After working as a yacht rigger, Bateman joined the Darien Police Department on November 1, 1973. Bateman enjoyed a popular reputation as a superb boater and avid fisherman.

Bateman was shot to death answering a burglar alarm on May 31, 1981. His police service is remembered on a bronze plaque and granite memorial at Darien Police Headquarters.