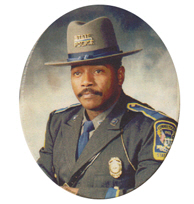 While conducting a traffic stop during a statewide commercial vehicle safety initiative, Trooper First Class Hall's cruiser was struck by a speeding pick-up truck. He sustained multiple injuries and passed away at a nearby hospital.

On September 2, 2010 at approximately 1600 hours, Connecticut State Police Trooper First Class Kenneth R. Hall was seated in his cruiser, parked on the shoulder of I-91 northbound in Enfield, conducting a traffic stop during a statewide commercial vehicle safety initiative. A pick-up truck was traveling northbound in the left lane of I-91 at a very high rate of speed. The pick-up truck veered to the right across three lanes of traffic and struck TFC Hall’s cruiser. Trooper First Class Hall sustained multiple injuries and was transported to Bay State Medical Center in Springfield, Massachusetts, where he was pronounced deceased. It has been determined that the driver of the pickup was under the influence of prescription and illegal drugs.