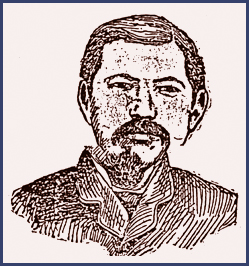 New Canaan became a "dry" town in 1885. Chief Constable Drucker was shot and killed when he went to serve a warrant to a resident who was in trouble on several occasions for selling liquor illegally.

Louis Drucker was Chief of Police in New Canaan in 1884. He was called that even though New Canaan did not have a police force as such then, only elected constables. He became "Chief Constable" that year by virtue of having received the most votes in the town election. A tailor by trade, he ran a small local garment factory, but was civic-minded and had served for several years as a volunteer fireman.

The Town of New Canaan became a "dry" town in 1885 and a resident, one Jacob Scheele got into trouble on several occasions for selling liquor illegally. On the 25th of January, 1888, at about four o’clock in the afternoon, Constable Louis Drucker, with a warrant in his pocket, called at Scheele’s house. When within about twenty-five feet of the front door, Scheele shot Louis Drucker from a window with a shotgun. Chief Drucker fell dead upon the snow from buckshot; twelve of which entered the heart of the unfortunate officer.

After firing the fatal shot Scheele shot himself three times in the abdomen and tried to put one through his temple. Scheele recovered from his wounds and was brought before a justice for trial and was taken to the Bridgeport Jail. Scheele was sentenced to death after two trials. One June 18, 1890 Jacob Scheele was the last hanging carried out in the Bridgeport Jail.