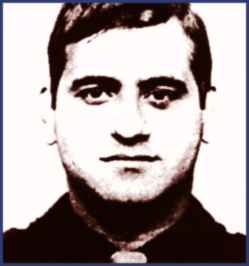 Officer Rienzo was directing traffic around an accident scene when he was struck by a drunk driver. He was treated for leg injuries but died of his injuries several weeks later.

On September 23, 1967 Officer Louis P. Rienzo was directing traffic around an accident scene at Prospect and Sachem Streets. A car driven by a drunk driver struck the officer knocking him down. The officer was taken to St. Raphael’s Hospital where he was treated for leg injuries. On October 11, 1967 Officer Rienzo took a turn for the worse and died that day of his injuries.