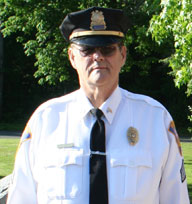 Sergeant Smith, a 39-year department veteran, volunteer firefighter, and Vietnam War veteran, was working on a traffic detail on Route 110 when he was struck by an intoxicated driver. He died from his injuries four days later.

Sergeant Orville Smith died from injuries sustained when a vehicle operated by an intoxicated driver struck him.

Sergeant Smith was working on a traffic detail on Route 110 at the intersection of Indian Well Road. He was standing next to his patrol car when the driver of a Nissan Frontier pickup truck struck him and his patrol car. Sergeant Smith was taken to Bridgeport Hospital where he died from his injuries four days later. The driver of the pickup truck was arrested and charged with driving under the influence. He faces additional charges related to the death of the officer.

His wife, sister and her husband and several nieces and nephews survive Sergeant Smith.