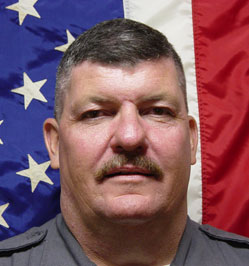 While searching a home for a man who had assaulted his girlfriend, MPO Lavery was ambushed and shot 15-20 times with a high-powered assault rifle.

MPO Peter Lavery and a back up officer were dispatched to the call. MPO Lavery arrived first and was met by the victim, who had an apparent cut to her face. The backup officer arrived a short time later while MPO Lavery was speaking with the victim outside the residence. MPO Lavery and the back up officer entered the house and attempted to locate the suspect. After clearing the main floor of the single family home without finding the suspect, officers proceeded to the basement. MPO Lavery started down the basement stairwell as his back up checked the last door that lead to the garage. As MPO Lavery descended the stairs the boyfriend opened fire with a high powered assault rifle, striking MPO Lavery 15-20 times in the chest and legs. MPO Lavery turned and fell to the bottom of the stairwell. The back up officer immediately notified dispatch that shots had been fired and an officer was down. The back up officer secured the victim and removed her to safety while additional officers arrived at the scene. No further communications were received from MPO Lavery. His bullet proof vest was torn apart during the assault. During the ambush, MPO Lavery was able to draw his weapon and fire one round prior to succumbing to his wounds.