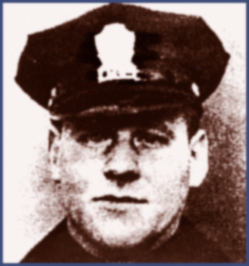 Detective Palma was among four officers who entered the Paramount Theater to confront two suspects wanted for a tie-up robbery. A shootout ensued, and Detective Palma was struck twice in the abdomen. He died of his injuries 32 days later.

In May of 1954 New Haven Police received a tip that two men wanted for a tie-up robbery in Middlebury were in the Paramount Theater in New Haven. At this time Detective Ralph Palma and Frank Longo along with Police Detective Sergeant John Doyle proceeded to the Paramount where they met up with Detective Frederick Gettner. All four entered the theater and confronted the suspects. Both were armed and began firing at the officers. During the shootout Detective Palma was struck twice in the abdomen, and in the darkness, both suspects fled.

One suspect fled to the attic of a house at 270 Factory Street. Police Chief Howard Young went into the building by himself confronted the suspect and fired three times, but it was later learned that the suspect had committed suicide. The second suspect took a cab out to Winchester and Henry Streets where he also committed suicide.

Detective Palma survived 32 days after the shooting but died on June 13, 1954 leaving a wife and two children.