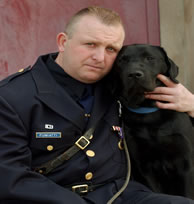 Officer Fumiatti was shot while temporarily assigned to the Investigative Services/Street Interdiction. He was able to testify in both state and federal trials, leading to the conviction of his shooter, and to return to work, but succumbed to his injuries.

Robert Fumiatti was born April 27, 1971 in New Haven. He grew up in West Haven and graduated in 1989 from West Haven High School. Prior to joining the NHPD, he was employed by Bayer Pharmaceutical Division as a lab animal technician.

Fumiatti followed in the footsteps of his father, Vincent, who was a member of the New Haven Police Dept. from June 29, 1964 until his retirement (at rank of Detective) on February 4, 1992. Fumiatti was hired December 7, 1998 and attended the New Haven Police Academy, from which he graduated on May 21, 1999. He was assigned to the Patrol division. On April 28, 2002, Fumiatti was temporarily assigned to the Investigative Services/Street Interdiction. While assigned there, on June 13, 2002 he was shot by Arnold Bell. Rob subsequently testified in both state and federal trials, and his shooter was convicted in both forums. His spirit inspired State's Attorney Kevin Doyle to write a beautiful letter to Chief Francisco Ortiz, which stated in part:

"I want to formally recognize the courage and professionalism of Officer Robert Fumiatti ... His return to work from being shot in the face is truly a miracle. Even more impressive than his physical recovery, is Officer Fumiatti's ability to remain professional and forgive Michael Rice, the addict who traded the gun that was used in the shooting of Bob ... Bob had the strength to forgive Rice and specifically asked Judge Damiani not to put Rice in jail ... Officer Fumiatti's bravery and ability to forgive epitomizes the community policing ideals. I do not know many people who could go through what Bob had to endure and still be able to forgive and remain professional in the way Bob did. I am honored to know Officer Fumiatti, and even more grateful to call him a friend."

Remarkably, Fumiatti was determined to return to the Police Department and came back to work on January 26, 2004 to work in the Narcotics Enforcement Unit. He became a dog handler after graduating the state police canine training unit with his new partner, "Major." Later, in January 2005, he worked in the Chief's Office on a variety of crime analysis projects, including working closely with the federal authorities in the Time 'Zup program. Most recently in November 2006, Fumiatti was assigned to the Firearms Unit in the Investigative Services Division. During his tenure, in 1994, he was awarded a Certificate of Appreciation from the Military Order of the Purple Heart as well as a Departmental Letter of Recognition.

Officer Robert Fumiatti tragically succumbed to his injuries on January 10, 2007. He leaves behind his wife Stacey and his children, Madelyn, Caitlin and Vincent, his parents Marguerite and Vincent Fumiatti, his brother and his wife Michael and Dawn Fumiatti, his sister and her husband, Debra and Dennis Powers and many loving nieces and nephews.