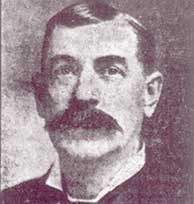 One of the Town of East Hartford's first official (paid) police officers, Chief Kappenberg was struck by an automobile while working traffic duty on Main Street.

Chief Robert W. Kappenberg was struck by an automobile while working traffic duty on Main Street. The Robert W. Kappenberg was elected as Constable from 1894 until 1897 at which time he was appointed as the second official (paid) Police Officer of the Town of East Hartford; his responsibilities were to patrol the streets at night watching property and maintaining order.

Officer Kappenberg worked night duty for 18 years until he was appointed as the Town’s first day duty officer. Mr. Kappenberg was, at some point (exact date unknown), designated by the Town as their Chief of Police and placed in charge of the Police Force -- which consisted of two Patrolman and two Supernumeraries.

The accident which resulted in Chief Kappenberg’s death happened on Main Street, Near the new bank. The Chief had been doing regular duty on Main Street and was keeping a watch on the traffic on the west side of the street for the purpose of keeping the north-bound vehicles on the east side of the street. He was in the act of sending an offender back to the east side when he was struck. George Young of Springfield had passed the traffic officer at Church Corner and, when near the home of Dr. F.H. Mayberry, cut back onto the west side of the street. Chief Kappenberg was standing in the street near the corner of Chapman Street when Young crossed to the west side. The Chief began to signal Young to go back and in doing so, he walked to the southeast on the roadway and was struck in the back by an automobile owned and operated by William Moll of Irvington, N.J.

The Chief received a broken jaw, broken collar bone and four broken ribs. The automobile passed over his shoulder. Daniel D. Bidwell, who was standing nearby, rushed to the street. With the assistance of Mr. Moll, he carried the injured man to the side of the road and Dr. E.H. Truex was called. Chief Kappenberg was removed to the Hartford Hospital after the accident and was, apparently, gaining each day. He was able to sit on the veranda of the Hospital last Friday and Saturday and his condition was about the same when he went to sleep Saturday night. He slept as usual until just before 5 o’clock, when the nurse was attracted to the bed by his peculiar breathing. She spoke to him and he asked for a drink of water, but he was dead before she returned with the water.