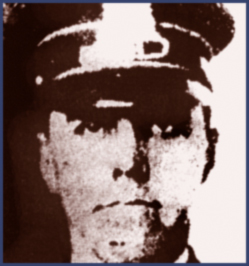 Officer Koella had responded to a burglary and was chasing the suspect when he was shot and killed.

On March 16, 1935 at about 1 A.M. Officers Walter Koella and Kelly responded to 12 Harding Place on a burglary. They saw a suspect walking away and at this time they chased the suspect up Sherman Parkway towards Bassett Street. At this time, the suspect ran into a rear yard at 963 Sherman Parkway towards Bassett Street. Officer Kelly tripped and Koella continued the chase. A mailman witnessed the suspect shoot and kill the officer. Officer Kelly returned fire and struck the suspect in the leg.

It was later learned that the suspect had broken into a policeman’s home and had stolen his service revolver which was used to kill Officer Koella.

He was survived by his wife, Charlotte and two sons, Water Jr. and John.