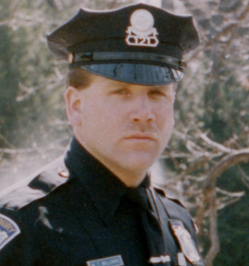 Patrolman Williams, an eight-year veteran, detained two men after witnessing a narcotics transaction. While patting them down, one of the men shot him behind the ear. The suspects fled the scene, leaving him lying in the street.

A massive investigation was immediately launched using all the resources of the Police Department. Within hours, detectives had two men in custody, twenty-four year old Richard Reynolds and Anthony Crawford. The men were discovered hiding in a second floor apartment at 47 Wood Street in Waterbury. Also discovered inside the apartment was the pistol used by Reynolds. The investigation revealed that Reynolds was a cocaine dealer who feared returning to prison. Reynolds confessed to police that he shot Patrolman Williams.

At approximately 7:30 PM that evening of December 18, 1992, Patrolman Williams succumbed to his injuries at St. Mary’s Hospital in Waterbury.